The volcanoes of Scania

(Fig. Modified map from Bergelin thesis showing a handfull of basalt necks. There exist over a 100 in total)

Sweden is hardly famous for its volcanoes and most Swedes doesnt know about them. But we do have them, or at least the remains of ancient ones in the form of basalt necks (swe. “basaltkupp”) in the south of Sweden, in the middle parts of Scania along the Tornqvist zone. This was, as I showed in my last post on the general geology of Scania, an active volcanic province at two major times, with pulses at 191-178 Ma and 110 Ma.

About two weeks ago, me and three other geology students took a road trip to locate some of them. We found three. Knösen, Rallate and Gällabjär. None of them are difficult to locate and can be seen marked on the map above.

But as scenery or kodak moment, the basalt necks are somewhat lacking. Only Gällabjär (seen on first fig below), wich actually stands out from the surrounding landscape is any good in that aspect. The other two are much more difficult to get a descent photo of the entire neck. Covered in forest and shrubs they are pretty, but also camouflaged.

Fig below. Rallate. The basalt columns are very distinct here. As you can see, tectonic movement have tipped it over. 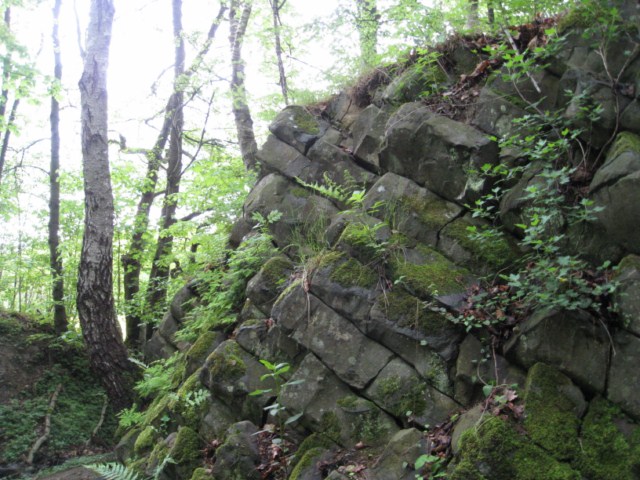 Fig below. Knösen. A small hill in the forest. A person could easily miss it since it hidden behind all the green beeches (Fagus sylvatica). But I swear, its there. And its a lovely spot to look for olivine rich xenoliths in the basalt.

Figs below. First photo is a basalt specimen from Knösen with some olivine xenoliths. Second photo is sample from Rallate where theres no xenoliths, but instead much cracks filled with plagioclase (not sure on the mineral, please correct me if you think you know). The Gällabjär neck had standard basalt, and I took no photos or sample. 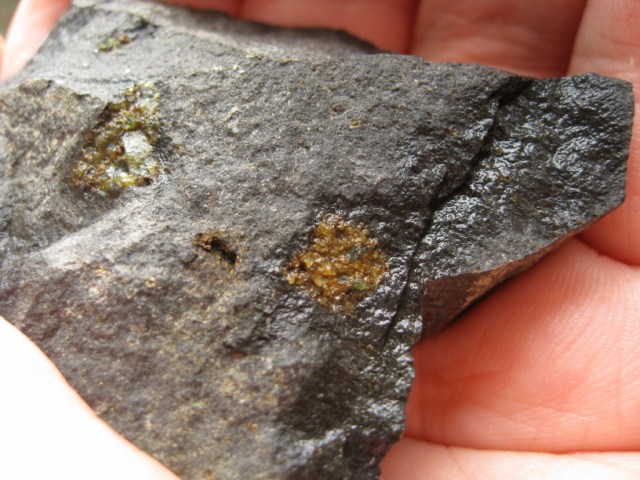 7 Responses to The volcanoes of Scania